Caleb Harris was born and raised in eastern North Carolina. He attended East Carolina University where he obtained both a B.A. and M.S. in Organic Chemistry. During his time there, he worked under the supervision of Prof. Shouquan Huo on the development of new cyclometallated platinum complexes for use in organic light-emitting diodes (OLEDs). He then traveled to Atlanta, Georgia where he earned his Ph.D. in Inorganic Chemistry working in Prof. Jake Soper’s lab at the Georgia Institute of Technology (Georgia Tech). While in Atlanta, Caleb studied the correlation of electronic structure and reactivity in a series of cobalt complexes bearing redox-active ligands. In 2017, he joined the Berry lab as a postdoc working with the NSF Center for Selective Carbon-Hydrogen Bond Functionalization (NSF-CCHF). In 2020, Caleb was promoted to research scientist and currently has his hands on many projects. Michael Aristov was born and raised in Los Angeles, CA. He completed his B.S. in chemistry at University of California, Davis. During his undergraduate studies, he worked closely with Professors Marilyn Olmstead and Alan Balch to explore the coordination chemistry of small molecules like CS2 and N2H4•H2O with ruthenium complexes. From these experiences, he developed a passion for crystallography that he aims to utilize in a variety of high pressure experiments involving the distortion of metal-metal bonds. In his spare time, he likes working out, writing short stories, coding, and exploring downtown Madison with friends.

Michael "Tren" Trenerry grew up in Rochester, Minnesota. He attended Carleton College in Northfield, Minnesota, where he obtained a B.A. in Chemistry and in Mathematics. At Carleton he worked with Dr. Buck Taylor and Dr. Matt Whited in a collaborative project investigating catalytic alkene hydrogenation and CO2 activation promoted by rhodium silyl pincer complexes. In the Berry group, Michael uses a combination of experimental and computational tools to study bimetallic transition metal catalysts used in the electrocatalytic NH3 oxidation reaction. Outside of research, Michael enjoys discovering and listening to new music, playing the piano, reading, and running. Trey Pankratz was born and raised in Grand Rapids, Michigan. His pathway through undergrad was a bit tumultuous, starting at Grand Rapids Community College (GRCC) in Grand Rapids, then doing a summer of research in the lab of Dr. Jeff Johnson at Hope college in Holland, Michigan. There he worked on a nickel-mediated coupling of boronic acids and phthalimides to produce ortho-substituted benzamides. From there, Trey went on to Grand Valley State University (GVSU) in Allendale, Michigan and worked in the lab of Dr. Richard Lord. With Dr. Lord, Trey worked on using time-dependent density functional theory (TDDFT) to model the excited states of a series of nickel pincer complexes. He then graduated from GVSU and arrived at UW-Madison in the Berry lab at the end of 2018. In his spare time Trey is a huge movie fan, enjoys reading Stephen King, loves a fancy cocktail occasionally, and tries his best to run, but often finds himself lacking the motivation to do this, so usually does literally anything else. Amelia Wheaton primarily grew up in Springfield, VA. She attended the College of William and Mary in Williamsburg, VA and obtained a B.S. in Chemistry. While at William and Mary, she worked for Dr. Robert Pike on elucidating the structures and charge transfer behaviors of iodocuprate (I) clusters with various alkyl pyridinium cations. She then arrived in Madison in the summer of 2018 and joined the Berry group at the end of 2018. Amelia’s research in the Berry group focuses on heterotrimetallic extended metal atom chain (HEMAC) complexes, which are versatile molecular systems which can be used to explore the fundamental chemistry of metal-metal multiple bonds and their potential applications as molecular electronic devices. Outside of the Berry group, Amelia enjoys running and listening to podcasts on long walks around Madison.

Milton Acosta was born in Waukegan IL. He went to Carthage College where obtained his B.A in Chemistry. Before attending UW-Madison he had the opportunity to intern in the pharmaceutical industry where he did computational research focused on finding intermediate and transition states for radiolabeling and stable isotope labeling of multiple substrates with deuterium and tritium. In his spare time, he likes to go to the gym, cook, and shoot pool. Samantha Stegman (she/her/hers) was born and raised in San Diego, CA. She attended the University of California Berkeley where she earned a B.S. in Chemistry and a B.A. in Astrophysics. Throughout her time as an undergraduate, Samantha conducted astrophysics research concerning supernovae under Dr. Alex Filippenko, and explored the growth and use of organic superconductors in the new lab of Dr. Kwabena Bediako. After graduating, Samantha spent 18 months at Argonne National Lab synthesizing and characterizing new actinide compounds under the direction of Dr. Richard Wilson. She then came to Madison to begin her Ph.D. studies in the fall of 2020 in the Berry research group. In her spare time, Samantha enjoys watching Star Trek, playing the drums, and hanging out with her cats, Ferrocene and Schrodinger. James Harris was raised around the Harris County and Columbus area of Georgia. He attended the University of West Georgia and graduated with  BS in Chemistry. While at UWG, he worked with Dr. Spencer Slattery investigating the electronic and steric effects of a single substituent on the redox and spin state behavior of iron (II) bis-terpyridine complexes.  With a love for coordination chemistry synthesis and spectroscopy, James moved to the considerably colder Madison and found his home in the Berry lab near the end of 2021.In his somewhat rare spare time, James enjoys going for walks, exploring his new home state, spending quality time with friends, and drinking hot chocolate in a desperate search for warmth. 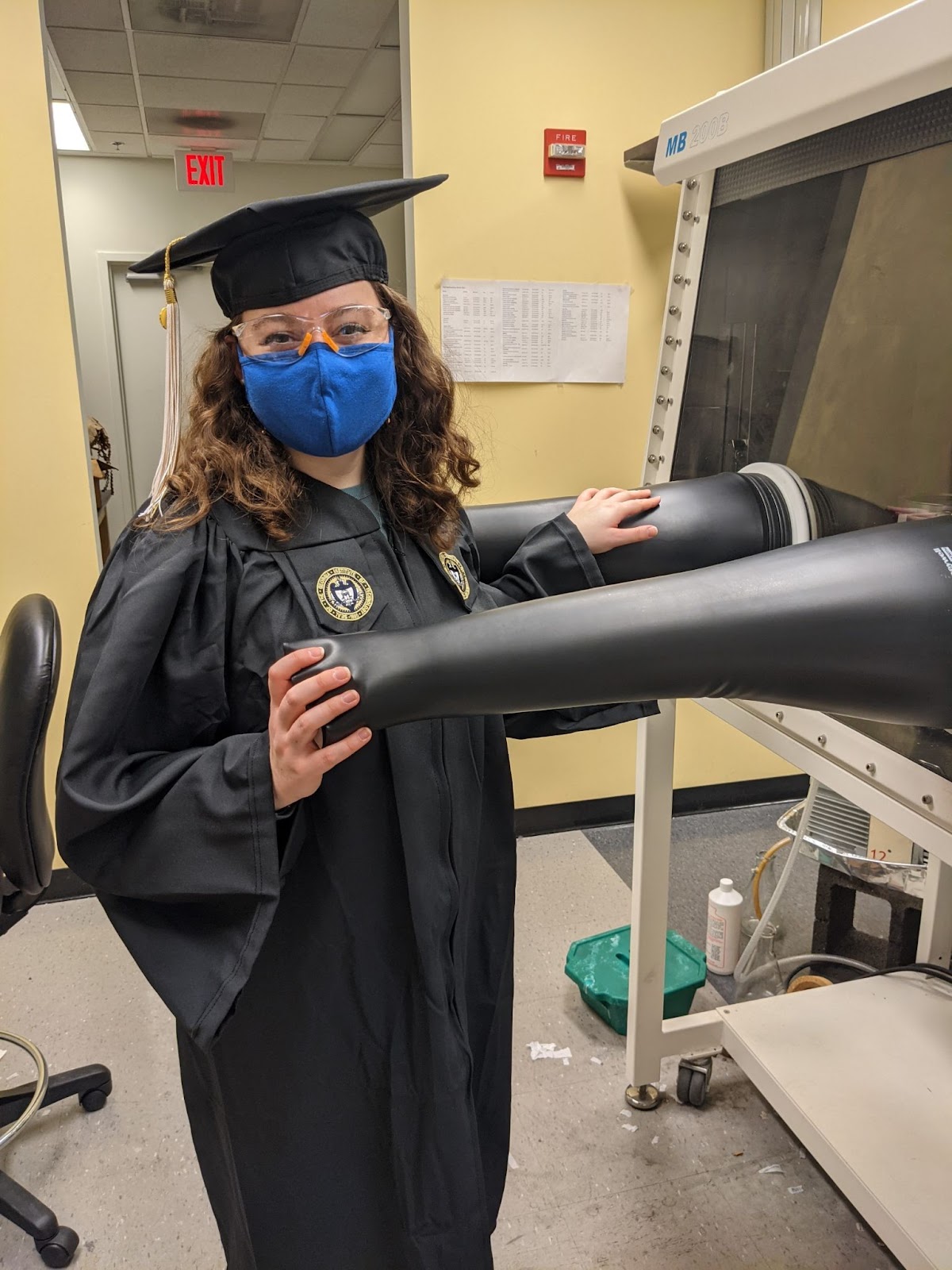 Rebecca Walde grew up in Warner Robins, GA. She did her undergrad in chemistry at the Georgia Institute of Technology (GT) where she did research with Joseph Sadighi looking into the bonding and properties of low valent copper (I) and gold (I) species supported by N-heterocyclic carbenes (NHCs) for CO reduction.  While in undergrad she also spent a summer at Lawrence Berkeley National Lab working with Brett Helms on infinitely recyclable plastics. After graduating from GT in the winter of 2020 she spent the spring and summer working with Dr. Sadighi on a new project developing copper (I/0) nanoclusters supported by NHCs. Ultimately, she landed at UW Madison to begin her Ph.D. studies where she joined the Berry group in late 2021. In her free time she likes to go hiking, read fiction, play video games, and cook or bake. Alex Pavelic grew up in a suburb of Milwaukee, WI. He is a senior at UW-Madison majoring in chemistry. Currently, he is working with Michael Trennery to study different transition metal catalysts used in the electrocatalytic NH3 oxidation reaction. Outside of research, Alex likes astrophotography, tennis, and playing saxophone in the UW Jazz Program. Kyle Hanauska grew up in Milton, Wisconsin. He is a junior at UW-Madison and majoring in chemistry. He is currently working alongside Michael Roy to study the redox behavior of diruthenium compounds. In his spare time Kyle enjoys bow hunting, fishing, and being outdoors.

Sungho "Dima" Park, graduate student  (2015-2021), Currently a postdoctoral research scientist at the Columbia University in the City of New York

Efrey Noten, undergraduate (2015-2018), graduate student at the University of Michigan

Alex Jambor, undergraduate (2015-2017), currently employed as a faculty assistant in the Chemistry Department prior to graduate school

APRIL 1, 2013: Brian gets the first publication of the year, "Lewis Acid Enhanced Axial Ligation of [Mo2]4+ Complexes" in Inorganic Chemistry!
JANUARY 8, 2013: We would like to welcome our new Post-Doc, Tim Berto, to the group!
DECEMBER 17, 2012: Shout out to Shu on her latest paper in Polyhedron entitled, "A Convenient, high-yielding, chromatography-free method for the insertion of transition metal acetates into porphyrins"!
NOVEMBER 2, 2012: Shout out to Kasia on her latest publication in ChemComm entitled, "Introducing a Mixed-Valent Dirhodium(II,III) Catalyst with Increased Stability in C-H Amination"
SEPTEMBER 13, 2012: Congratulations Shu on your paper in JACS, entitled Covalent Attachment of Catalyst Molecules to Conductive Diamond: CO2 Reduction Using "Smart" Electrodes.
AUGUST 30, 2012: Our new group meeting time will be Thursdays at 4:30 pm in room 8341, come join us if you are in interested!
AUGUST 15, 2012: Congratulations to Eugenia for an amazing thesis defense, a great 5 years, and her new job at the University of Wisconsin at La Crosse.
JULY 12,2012: Congratulations to George for his paper on Electrophilic Aryl C-H Amination by Dimetal Nitrides being published in Chemical Science!
JUNE 2012: Congratulations to Shu and George for both successfully defending their theses in the same week!